To search for books, Browse Our Catalog

It is the mission of the Centerville-Center Township Public Library to provide traditional library services, current information, up-to-date technology, and other materials necessary for the entertainment and lifelong learning of the patrons we serve. This library shall be a place where the past, present, and future come together for the benefit of all who call this community their home.

In 1821, a courthouse and jail were built in Centerville. In the few years that followed, Centerville citizens asked for a secure place to house prisoners. A certain element of Centerville society sought to secure Centerville permanently as the county seat of Wayne County. To this end the group raised $80,000 to build a palatial home with a 20-cell jail attached. An ornate iron fence at an additional cost of $10,000 surrounded the jail and other courthouse square buildings. The jail was completed in 1867. 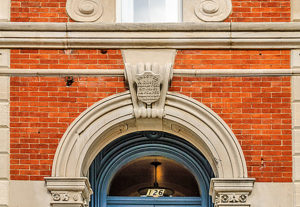 On March 8, 1873, the county seat was moved to Richmond after Centerville’s petitions to remain Wayne County’s center of government fell on deaf ears. Losing the status of being the county seat and all the financial, cultural, educational and legal advantages that came with it set off another battle of the Court House Wars.

On Aug. 14, 1873, court papers that had been stored in the jail were removed from Centerville to Richmond.

On Nov. 14, 1873, the jail at the back of the house and the iron fence were removed to Richmond. Centerville citizens fired cannon balls at their own jail and the workers. Two holes above the Main Street door were made by a six-pound cannon positioned in the archway across the street. Other small firearm shells were also shot from the archway. During this time the National Guard was called to monitor the situation for several days.

Finally, the Board of County Commissioners declared that the entire Courthouse Square consisted of useless buildings that were producing no revenue. Furthermore, they said they were fire hazards. The future library building was sold for $1250 to Simon and Flora McConaha. It changed hands many times until 1924 when the trustees of Hiram Lodge #417 Free and Accepted Masons purchased the home. It was enlarged to the east under their ownership.

In 1997, the Library Board of Trustees purchased the building for the new home of the Centerville-Center Township Public Library. A large addition was added on the west and north sides while preserving intact the south-facing front façade of the original jail. It was dedicated in December 1999.

You can read more about this fascinating history at WayNet.org – War for the County Seat.
See historical photos of the Warden’s house at the Library of Congress.

The gazebo, built in 2005 by students at Centerville High School, is a fine place to read on a pleasant day. Many take advantage of the gazebo while accessing the library’s free Wi-Fi on their laptops. Wi-Fi access is available 24 hours a day without a password.

The grounds of the library are beautifully maintained by staff and volunteers. Enjoy the seasonal flowers and the statuary.

Almost 80 works of art, all created by local artists, are owned by the Centerville Library. All have been donated over several decades. Additional donations of local art are very welcome.